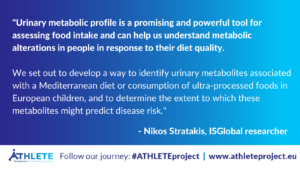 An international team from partners within the ATHLETE project has identified metabolic “signatures” in urine that can be used to assess the quality of children’s diets and predict their metabolic health. This urinary metabolic profile, which has been published in an article in eLife, could become an additional tool to traditional questionnaires to objectively assess dietary patterns in children, as well as to evaluate the quality of the diet of participants in future studies. It is also expected that this finding will allow the use of urine samples to provide further insights on shared biological pathways that characterise healthy and unhealthy dietary patterns, or diet-related metabolic changes associated with diseases such as diabetes.

Previous research has already identified diet-related changes in the body. These studies have largely focused on selected food groups, such as fruit, vegetables, meat and seafood. In contrast, dietary patterns related to the consumption of ultra-processed foods, which are high in sugars and fats, have been much less studied, despite the widespread consumption of these foods worldwide.

“Urinary metabolic profile is a promising and powerful tool for assessing food intake and can help us understand metabolic alterations in people in response to their diet quality,” explains Nikos Stratakis, ISGlobal researcher who shares first authorship of the study with Alexandros Siskos (Imperial College London) and Eleni Papadopoulou (Norwegian Institute of Public Health). “We set out to develop a way to identify urinary metabolites associated with a Mediterranean diet or consumption of ultra-processed foods in European children, and to determine the extent to which these metabolites might predict disease risk,” adds Stratakis, who at the time of the study was a postdoctoral researcher at the Keck School of Medicine (University of Southern California, USC).

The study is part of the European Human Early-Life Exposome (HELIX) project, coordinated by ISGlobal. HELIX includes six birth cohorts from the UK, France, Lithuania, Spain, Norway and Greece. The study population included 1,147 children from the project with available information on dietary intake, C-peptide levels in blood plasma and urinary metabolomic biomarkers from samples collected during follow-up at an average age of almost eight years.

The team then studied the extent to which these metabolites were associated with C-peptide, a biomarker used as an early indicator of metabolic disease risk. For each cohort, the researchers assessed the concentration of C-peptide in the blood plasma samples. They found that higher adherence to a Mediterranean diet was associated with lower C-peptide levels, while the opposite was seen for those who consumed more ultra-processed foods.

The findings of this study come with a few limitations, including around the use of NMR spectroscopy for urinary metabolite profiling. While this technique allowed the team to clearly identify and profile metabolites, it limited the number of metabolites they were able to measure across entire urine samples. “Our work should be supplemented with other complementary metabolomic approaches in future, such as mass spectrometry,” says co-senior author Hector Keun, Professor of Biochemistry at Imperial College London. “This would help to enhance the identification and quantification of metabolites associated with diet quality in children.”

“Further studies examining the association of diet quality and related metabolomic profiles with C-peptide will also be needed to replicate our findings,” adds co-senior author Leda Chatzi, Professor of Population and Public Health Sciences at Keck School of Medicine of USC. “For now, our work provides further evidence to support efforts by public health authorities to recommend increased adherence to a Mediterranean diet. Limiting the consumption of ultra-processed foods in childhood could lower the risk of disease later on.”

Page load link
This website uses first- and third-party cookies to obtain information on your search habits and to improve the quality of our services and your browsing on our website. To consent to our use of cookies, click OK or continue browsing. MORE INFORMATION OK
Go to Top